Managed to get in my first 6mm game, Polybian Romans vs Gauls, using Impetus rules and based for 15mm.  Great 4 player game with a Gallic (narrow) victory.  Thanks to Mark H, Graham and Michael for taking part.

Sadly I didn't get any pictures but Mark has written up an AAR with lots of pics which can be found here...

Got another game scheduled for mid December, Polybian Romans again, this time taking on my soon to be completed Parthian army.

Well friends, its taken 12 months for me to finish these guys testament to my speed/ dedication as a painter.

Its been a bit of a rock-n-roll year for me.  I was hoping to get these guys done in a few months but as usual with me it never worked out.  In between painting this army I took on some Volksturm and Hitlerjugend in 15mm for Richard, finished (yeah, right!) my late war fallschirmjager, got stuck into my French 100YW knights, topped up my classical Indian army with some skirmishers and in between all of that managed to go overseas, have an operation, renovations and all the other stuff that gets in the way of my hobby - life, work, bands etc.

All that aside, I actually finished painting these guys a few months ago but sat on basing them until I was more motivated.  I find basing to be terribly dull and I'd rather not do it quite frankly.  In the end it took 2 months just to base them all.  They are all finished now and I've started my next project, Parthians in 6mm, mostly by Rapier but with some Baccus thrown in for flavour.

The army itself is comprised of 2 army large army packs with a few odds and sods thrown in to flesh it out a bit.  When I started this we were all playing Field of Glory and as such is based for that ruleset but since starting Impetus has become the flavour du jour so although they are based on indvidual 40x15mm laser cut metal bases, they will fit both systems.

The roster is as follows:

3 legions, each of 8 bases velites, 8 bases of hastati, 8 of princeps and 4 triarii, all figures by Rapier.  8 bases of Roman citizen cavalry, 4 bases of pedites extraordinarii (Rapier princeps based as medium foot), 4 bases of Numidian light cavalry, 6 of Cretan skirmishers and 4 generals bases.  The Italians allies are 12 bases of Baccus thureophoroi based as 3 groups of 4 medium foot.  In the works I have some Gauls and slingers that are from my Carthaginian army but I'll wait and paint them further down the line.

As I said, this list was based for FoG but the Impetus list is much bigger leaving me with a quandary; do I buy more (wife groans!) or do I come up with some sort of cunning plan to thin them out?  The latter was the final choice, after much racking of brain I came up with the solution of using blank bases, 2 per unit of 4, to block out the units and create a checkerboard pattern of deployment that this army is known for.  For the price of 30 HF bases and some paint, glue and sand I doubled the size of the HF force!

And so, dear friends, to the pictures.  I tried a few different things this time, hopefully they turned out all right. 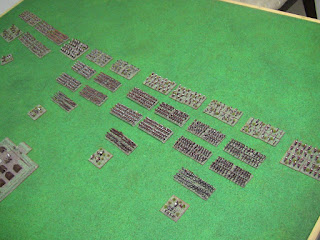 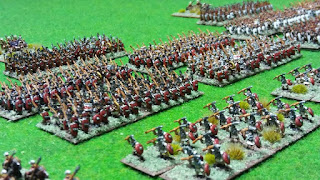 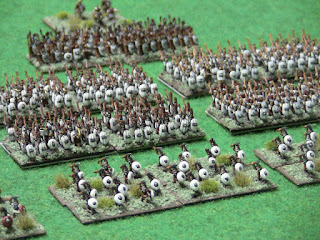 A bit of a close of of some of the legions. 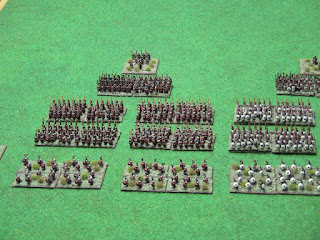 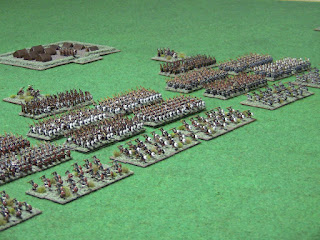 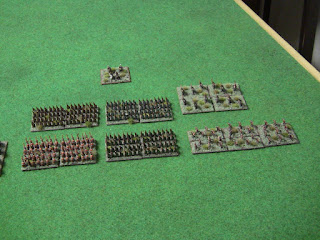 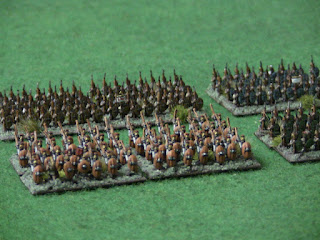 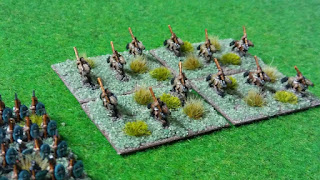 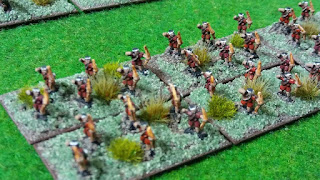 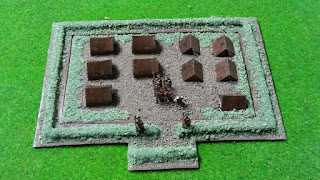 My interpretation of a Roman marching camp.  The base was made by the wonderful Mr. Barker to my specs.  The tent part is a standard FoG camp base 120x80mm with figures by Rapier and tents by Leven Miniatures (from their WWII range).  The ditch and bank are only for show hence are removable. 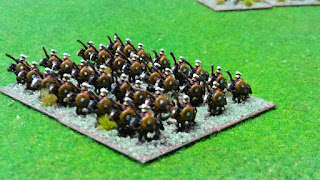 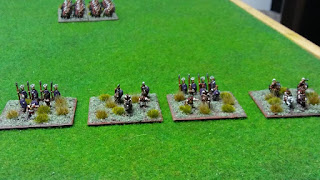 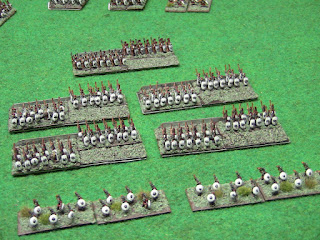 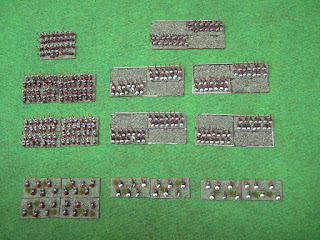 The "checkerbaord formation" or how to double the size of your force for virtually nothing!  On the left is the expanded legion in its movement trays and on the right a comparison showing the same number of figures.  The blank bases look exactly that - blank.  I've got more tufts in the post as I type so by the time I get them on the table they will be done.

Cant wait to get these guys out fighting.  They have been a looooong time coming.

I've learned a lot painting my first 6mm army.  I've tried to keep my style consistent wherever possible with my 15mm stuff but in some places its just not possible.  I've also managed to come up with a few shortcuts on my basing technique which should take some of the pain out of future armies.

Hope you enjoy the pictures.

Its been a long time between posts, I really should be more motivated.

Having been involved in this hobby for 40+ of my 48 years on this earth I have finally painted a Napoleonic unit... the Scots Greys.

This period is really not my thing, I'm an ancient gamer at heart but I was invited to take part in the Napoleonic Wargames Society re-enactment day organised by the ubiquitous Mr. H.  I have to say I'm glad I did. The day itself was magnificently organised, tables groaning with lead and lots of "Nappy heads!" around.

See these posts for further details...

The figures themselves, supplied by Mark are from the excellent AB range and were beautifully cast with little flash and no deformities.  One quibble I have is that the troopers with sabres at rest had a web of metal between he left leg and saddle cloth that needed to be removed but this was quite simple if the metal was fairly thick.  This small issue aside, I cannot recommend AB enough but bear in mind my experience with these figures is limited.


I cannot take credit for the basing, only the painting.
On the day they acquitted themselves quite well making a headlong dash directly at Mareschal Ney, the look on Richards face was priceless!  Sadly le brave des brave didn't end up le mort des mort and escaped with a red face.

In the meantime I have not been painting much due to work commitments etc but my 6mm Polybian Romans are well under way.  The first of 3 legions is finished, the second undercoated and ready to go.  Pictures soon.
Posted by Stretch at 22:59 1 comment:

Got this fantastic AB figure from Mark H yesterday to use in the upcoming NWS Waterloo bicentenary re-enactment.  I'll be commanding the afore mentioned gentleman on the day and was glad to get a figure to paint myself.

Beautifully sculpted and cast as a one piece, the old bugger will hopefully do better than yesterdays debacle (http://onesidedminiaturewargamingdiscourse.blogspot.com.au/2015/04/quatre-bras-ney-vs-wellington.html).

I'm not a fan of Napoleonics, never have been, but its nice to do something different once in a while and with this being such a milestone event it was hard to say no.

It was a bloody affair, in the first 2 rounds of combat I lost 3 groups of 8 spearmen and 2 generals, however weight of numbers finally turned the tide in my favour with both English wings collapsing and the centre having marched through the Scots lines were hemmed up on both sides.

This is the first time I've taken photos of my Scots in action were the pictures turned out ok (and they won!) but I think I might have to rethink my photography strategy to get better pictures.

After many years of waiting to get all my other stuff finished I got a nice little parcel in the post yesterday... 2 Polybian Roman army packs from those terribly nice chaps at Rapier Miniatures.

It has been my intention to move to 6mm for over 6 years but sadly my mountain of lead was such that my long suffering wife wouldn't let me spend any more money until I had got near the end of what I had in front of me.  Thankfully though my negotiation skills are such that I managed to convince her to let me spend some money while Rapier had their Christmas postage sale on... GBP3 postage for any size order anywhere in the world!!  On reflection I wish I had got the Carthaginians too but there is always next year, rubs hands and cackles.

I bought a few sample packs of these fellows when I went to Sheffield Triples in 2011 so I knew what I was buying but after placing the order I got terribly itchy feet and decided to paint a few samples, just for fun.  These are the results... 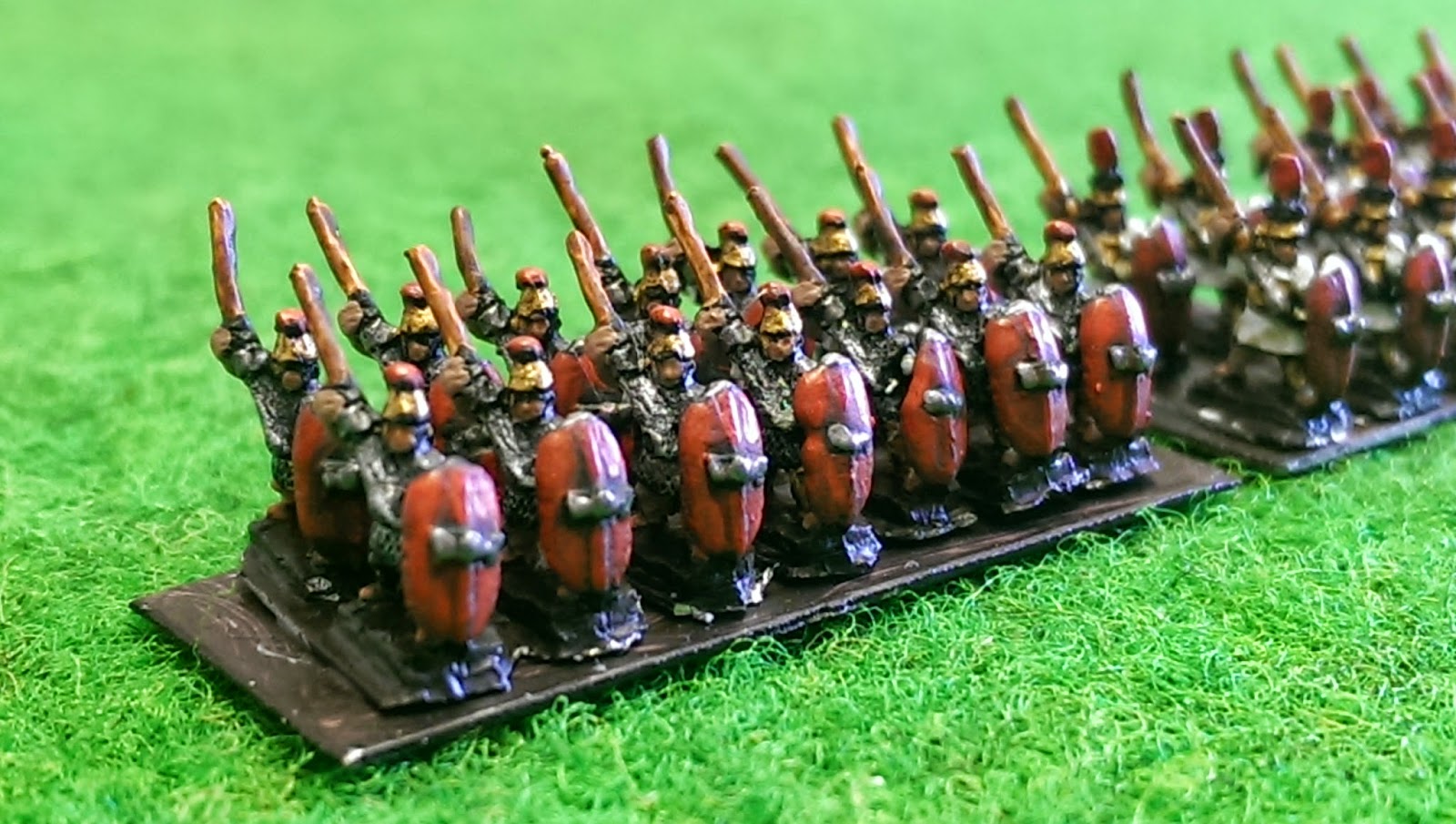 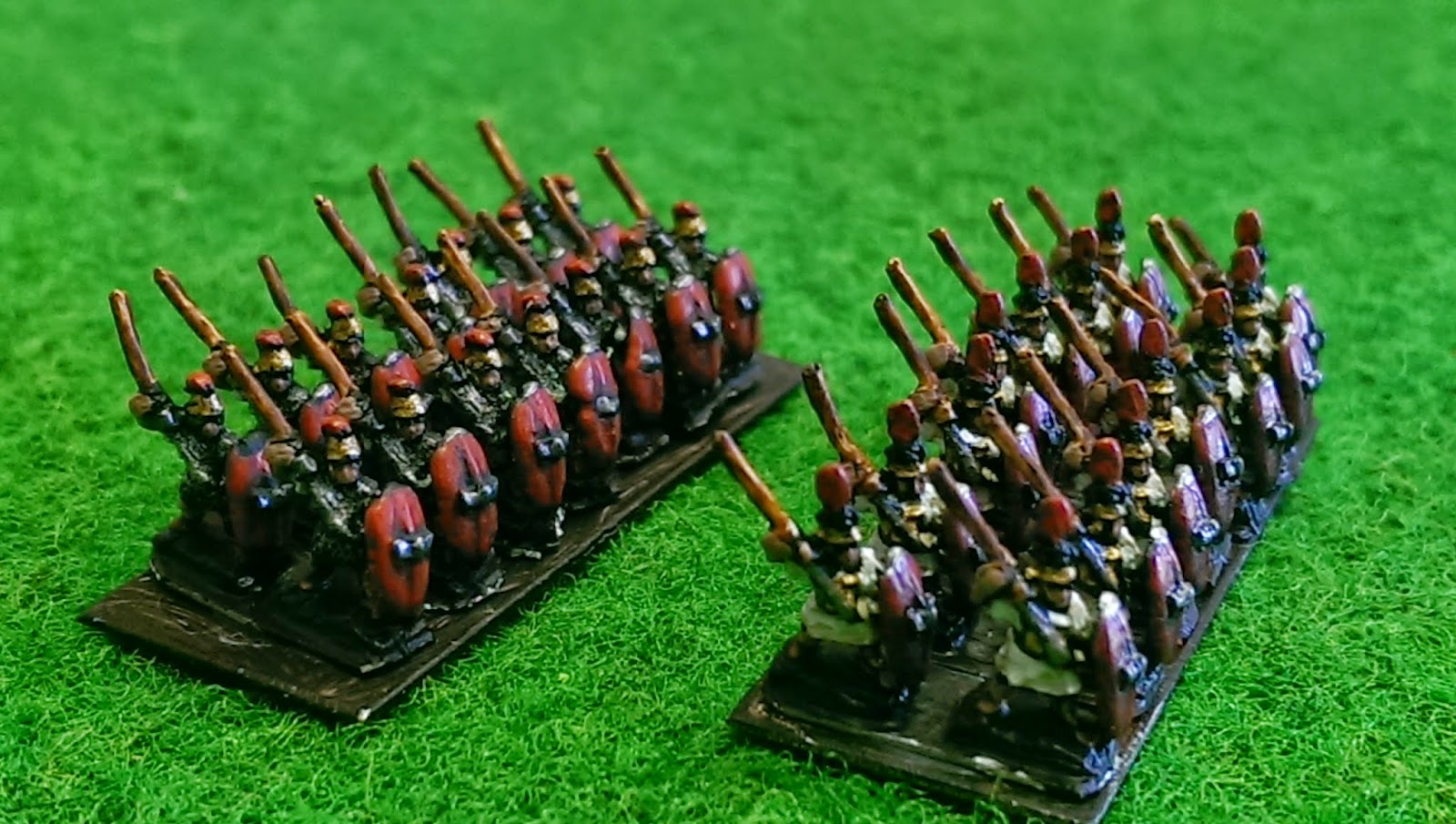 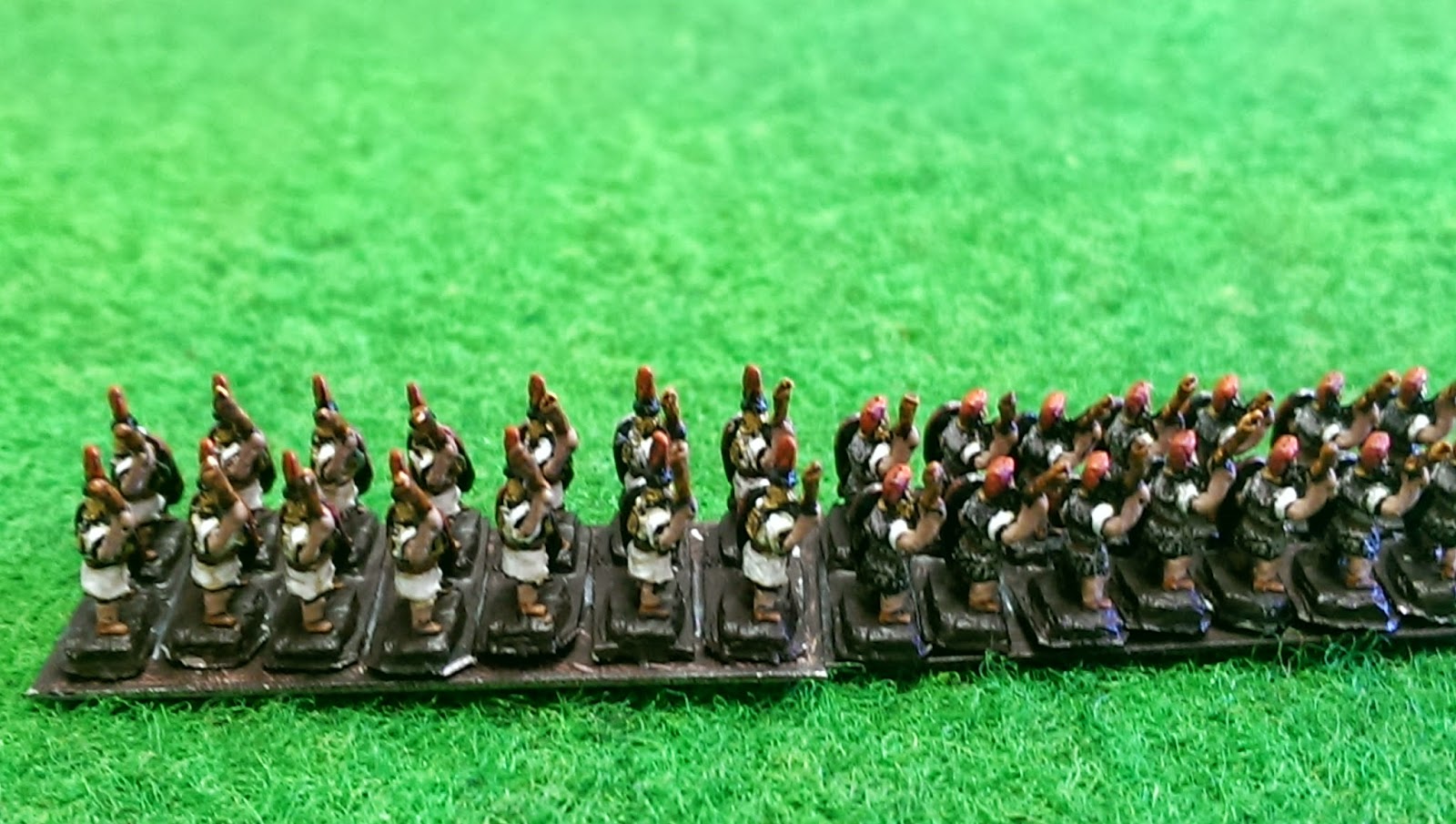 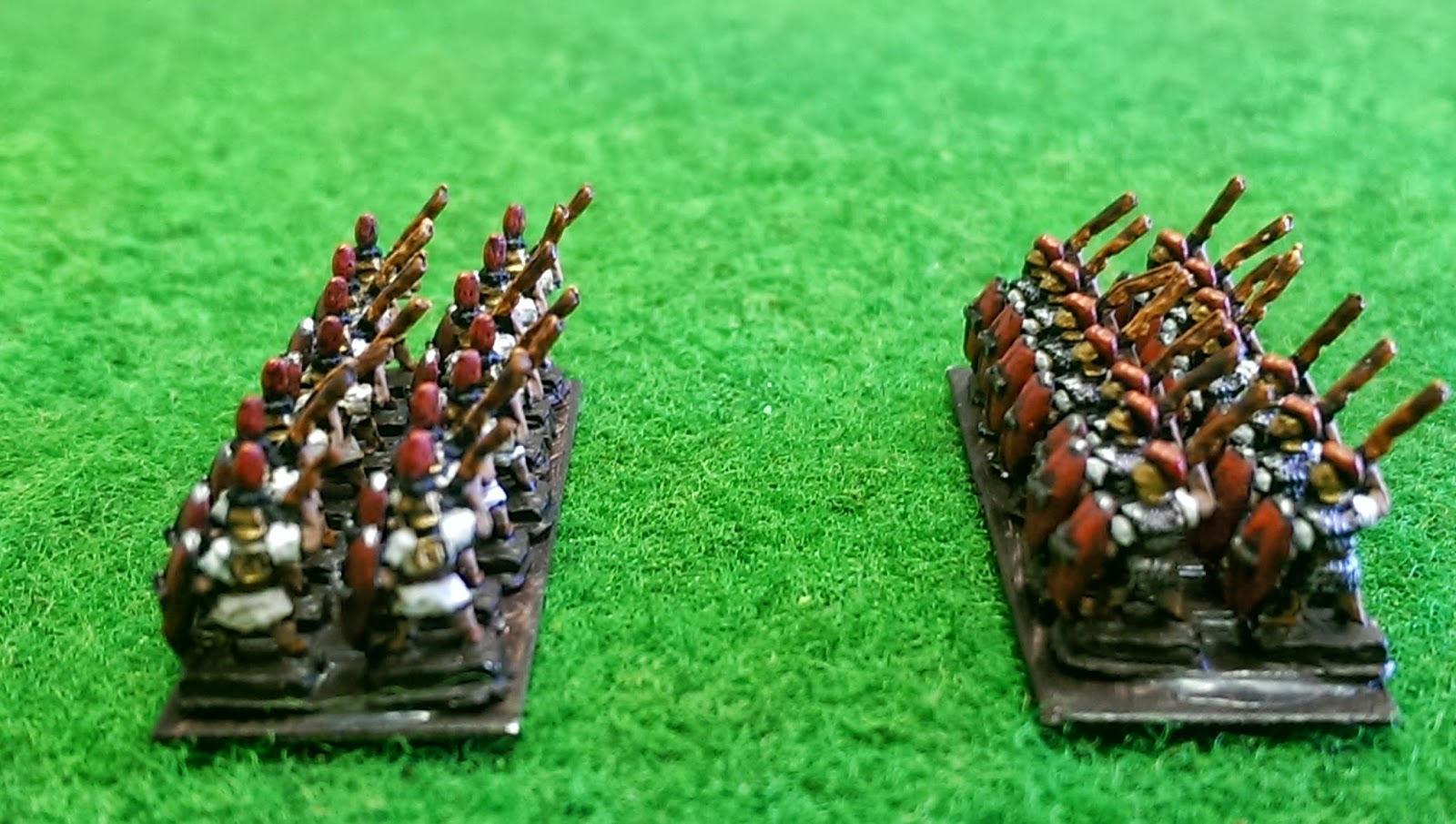 2 bases of hastati and principes, at the moment 14 men to a 40x15mm laser cut metal base but my intention is to base them 16 to a base for heavy and medium foot, 8 for cavalry and 6 to 8 for light foot.

I love 6mm.  They are easy and quick to paint, cheap to buy and post and most importantly you can have an army with 1000s of figures in it without having to play on the back lawn!  For me the mass effect is the main drawcard, bearing in mind that ancient battles had often upwards of 50000 soldiers per side.  A 15mm army of 500 or so figures really doesn't cut it for me anymore.

In the long term I would like to have at least 2 large armies from each of the Field of Glory army list books (my friend Andrew reckons I'm a megalomaniac) before I move on to WWII.

So all I have to do now is finish my 15mm ancient Indian army, should take me about another 4 weeks.  I hate being impatient.

Some pics of my Fallschirmjager

A few shots of my Fallschirmjager platoons.  I've been sitting on these for about 4 years and got a notion to paint them at the end of last year.  Unfortunately I haven't quite worked out the best settings for my camera so the pictures didn't turn out brilliantly.  Following is the best 5 shots from about 80 that I took.
This force consist of 2 platoons of rifle/MG, 9 stands per platoon with commander, overall company commander and company 2IC, a platoon of 4 HMGs with commander and a platoon of NbW35 10.5cm mortars with commander and spotters.  I bought the mortars by mistake thinking they were ordinary infantry mortars.  All figures are Battlefront Miniatures.
The camo pattern is my interpretation of Splittermuster 31, splinter pattern.  One thing I noticed when researching this force is that most painters paint headbands on the helmets however I could only find 1 picture in hundreds that actually showed it in real life. 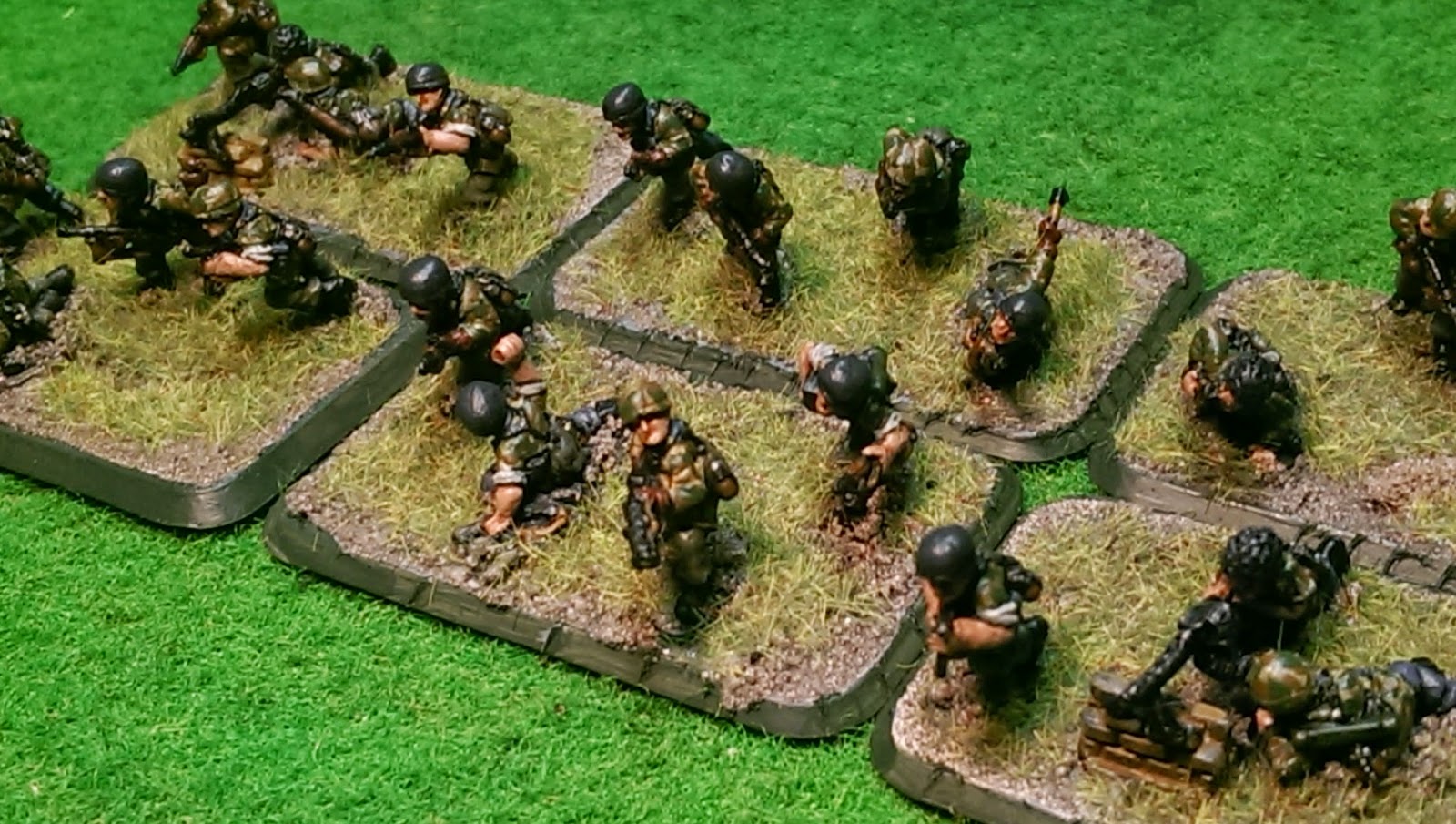 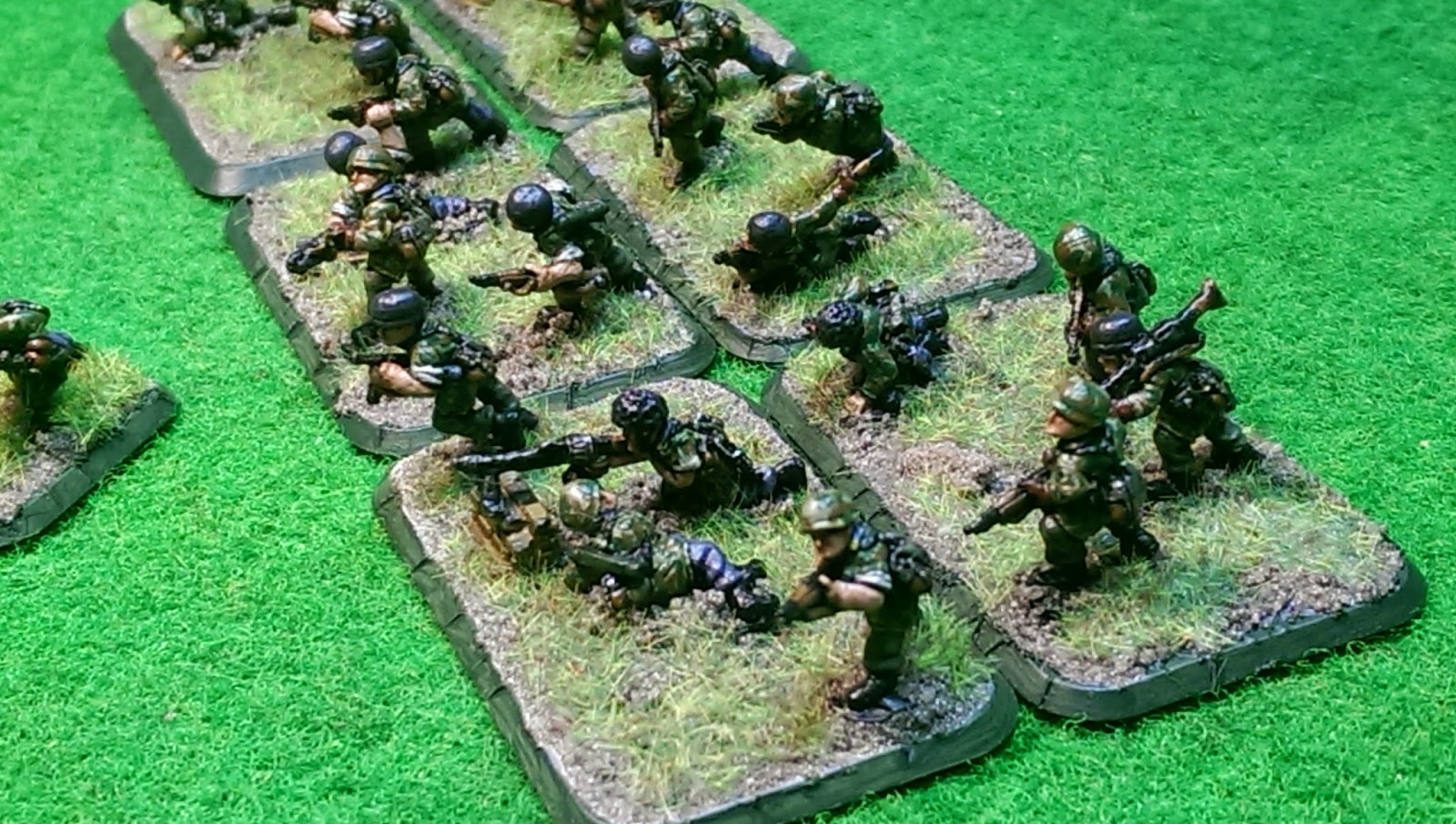